a free online portfolio? sign me up!
actually i already signed myself up and here it is: http://meffillustrations.carbonmade.com/

I'm still tweaking the selection and order.  It may not be all the way professional but I'm hoping to create the illusion of that with it.
Posted by Carl Meff at 6:54 PM No comments: Links to this post

egads! In my mecaf post i left out some major players: my tablemates, Jesse Durona (not pictured) and Randall Drew (pictured, he's the one who's not me).  It's always a pleasure working along side these gents and you really ought to take a gander at their works.

Posted by Carl Meff at 2:50 PM No comments: Links to this post

Well it's the day after MECAF (the Maine Comic Arts Festival) and after catching up on some sleep I have the time and energy to recap how the convention went.


But details!!! It was a wonderful convention with great folks hosting and attending.  It also had a great turn out of families and kids, making it a perfect debut for one of my few kid-friendly comics "The Book of Coloring."  You can see the cover design in the previous post.  I'd been keeping this idea relatively on the downlow, but here it is: it's a comic book that's also a coloring book, and the story is about coloring.

I had a sample book on display for people to add color to, which many did, from people who bought copies of their own to those that didn't, and both young AND older people.  Thanks to everyone that added a little something and here's a peek at what they made... 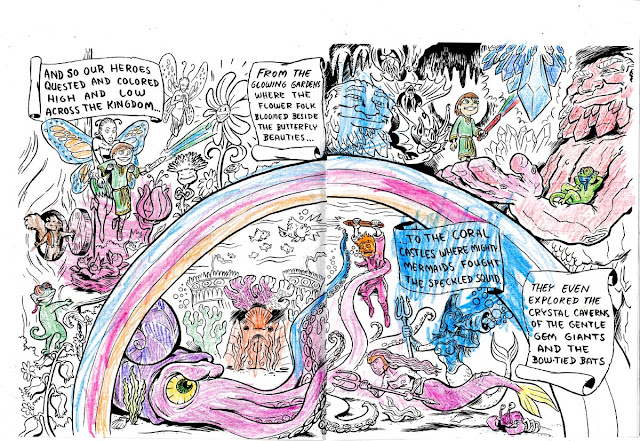 It's a simple story but I'm really proud of the premise. So much so that I'm getting serious about copyrighting so it doesn't get dobleganged

Some of the older folks had more of an eye for my collaborative series "Doctor Atlantis" which I gave away previews for.  You can find more preview pages in the "pages" section in the upper right area of this blog.  You'll also find details on the nationwide diamond push in previous posts, but there was recently an amazing article by the esteemed Jen Vaughn about it that's worth reading.  I may be good with the pictures but she's great with the words as well (double-threat!!)

One of the other projects that I didn't promote but will be returning to over the summer is my currently under hiatus webcomic "JoyuRiders." This is more of a teen to adult series, probably less appropriate for "Book of Coloring"s target audience.  But if you like coming of age stories mixed in with airships, adventure and a bit of sheer insanity, check it out here.

Also, though I tried not to spend all the money I made, I couldn't resist a few choice books from the amazingly skilled cartoonists there.  Maybe I'm supposed to check and see if I have permission to present their work online, but I've never known a cartoonist who didn't like free promotion (and it's just the covers.
When you get a chance, check out their works:
Jerel Dye whose amazing flying machines inspires me to push my own work in my webcomic
Stephanie Yue whose work is envy-inducingly beautiful
Zack Giallongo who is also amazing AND has an upcoming fantasy graphic novel called Broxo will soon be on my comic shelf
Ellen Crenshaw who is way friendlier than she needs to be for someone so skilled.

Blurg! Well that's all for now.  I'm psyched to bite into my little pile of super amazing comics and reach out to some of the other toonies in the great northeast.  My blogging so far has been blah to middling, but I'll try to keep things more up to date over the summer.

Keep your eyes peeled! (but not literally... eww)
-Meff 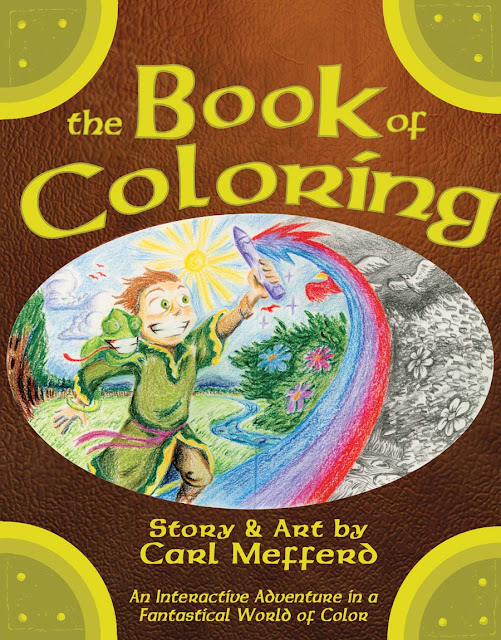 Hey everyone,
I handed out quite a few business cards at the Maine Comic Arts Festival (MECAF) so some of you may have followed the link to here.  I just got in from a long drive and my bed is calling, but early tomorrow I'll be posting a big update to make your visit worthwhile.

Thanks to everyone who bought copies of "The Book of Coloring," I was really touched by how much people liked the concept of it.  Thanks also to anyone who just came by to check out my other works or talk comics.  Keep an eye on this blog, some of the things i'll be posting about include:
-details on the convention
-more info on Doctor Atlantis
-links to my webcomic JoyRiders
-the process of making The Book of Coloring

and much more! Until then, take care.

Doctor Atlantis is available for order in comic shops nationwide!!! 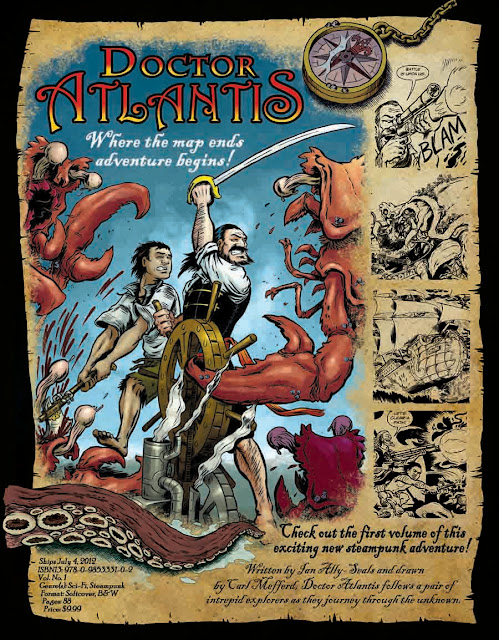 BIG NEWS! The high-seas steampunk comic "DOCTOR ATLANTIS" is in the current Diamond Previews Catalog, just waiting to be ordered by comic retailers ACROSS THE COUNTRY.  But in order to ship it, we need to reach our minimum order number, so start spreading the word! This collection includes the first THREE issues of the series, totaling 80 pages for a mere $10!

Check out and share these links to previews, behind the scenes tidbits and our fantastic Kickstarter pitch.  If this gets you hooked, you can read the rest of the series by ordering it from your local comic book retailer.  Tell them you want "DOCTOR ATLANTIS," published by RARE EARTH COMICS and appearing on PAGE 322 of this month's Diamond Previews.

Check my page archives on the righthand column for previews of the first two issues, and see my new behind the scene Doctor Atlantis Blog and Ian's Kickstarter pitch

UPDATE 5/10/2012: News from my partner in inks Ian Ally-Seals on how you can order Doctor Atlantis WITHOUT the Brick and Mortar middleman! You can follow the links below to order the Doctor Atlantis collection online (the third one is for UK orders) or even just google "Doctor Atlantis GN" to find many other online sellers!

"You can order Doctor Atlantis Volume 1 at a discount and have it shipped to your home. So, if you do most of your shopping online, hit up one of these sites. Thanks for all of your support and I hope all is well with you!" -Ian Ally-Seals


Posted by Carl Meff at 1:39 AM No comments: Links to this post

Carl Meff
I'm a freelance comic artist, storyteller and caricaturist. I've drawing people and making them laugh professionally for over five years. I love to talk shop and get feedback on my work so don't be shy! email:carlmeff@gmail.com phone: 860-693-8533